Why would you want a Pig? 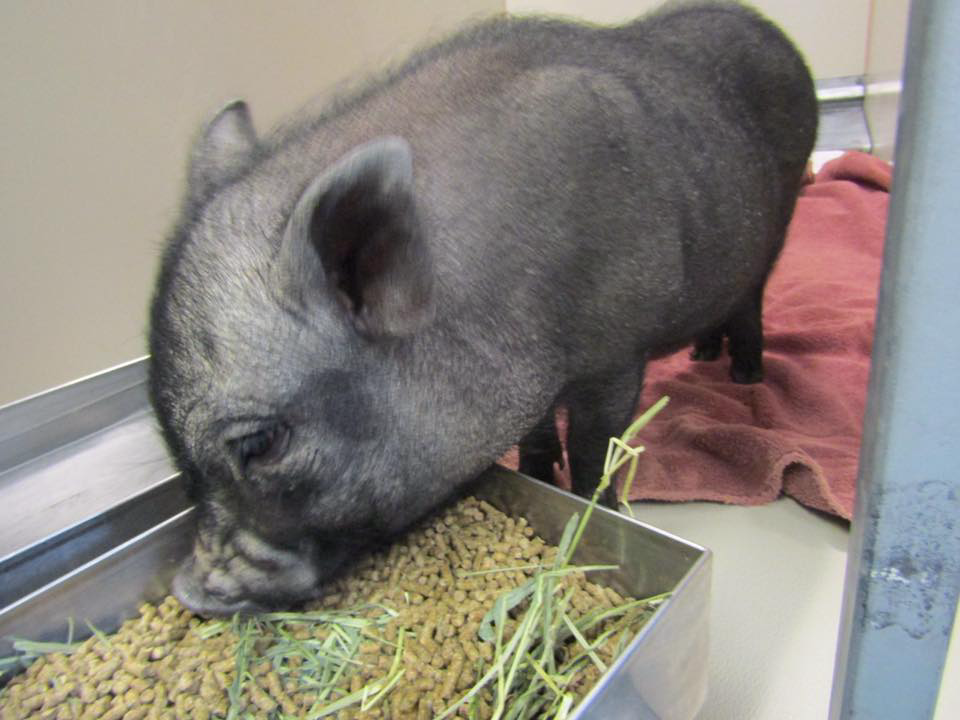 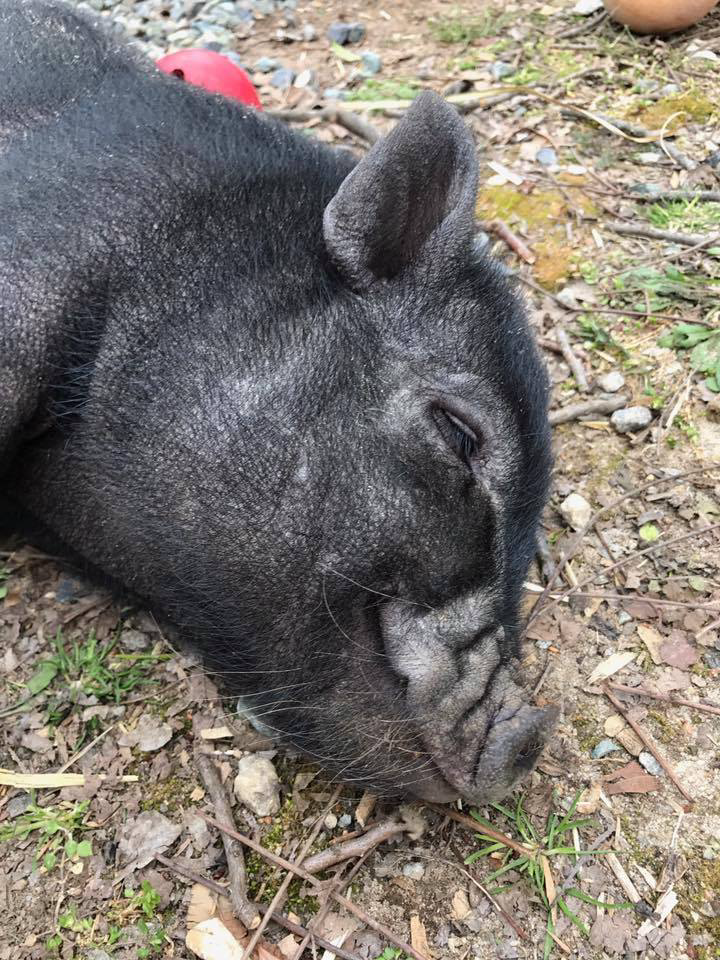 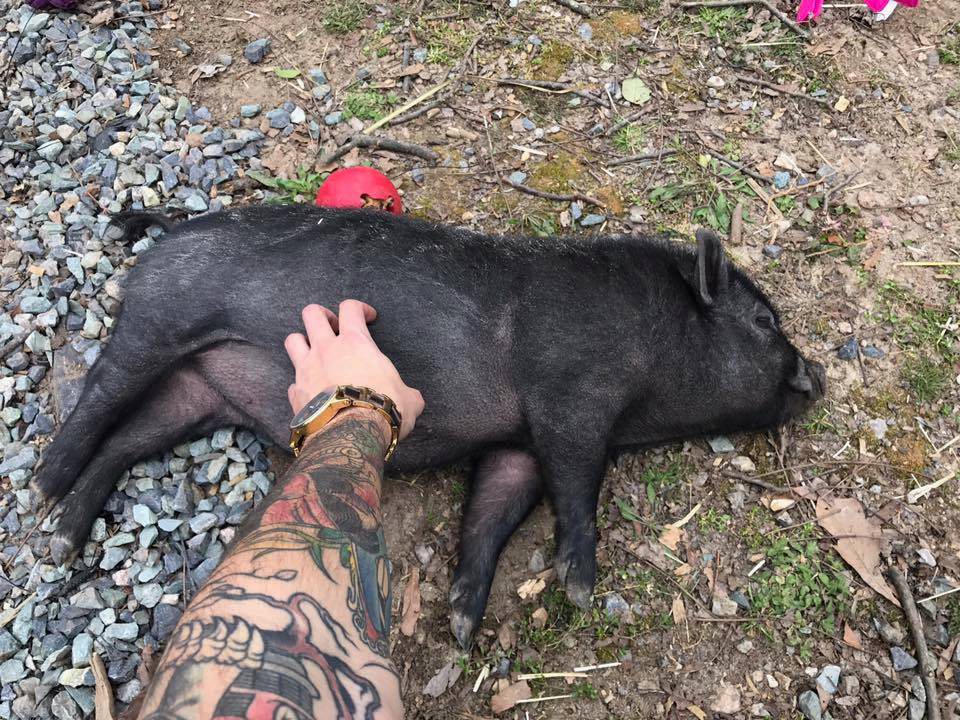 Who remembers this adorable piglet who found himself at the Wake County Shelter a few weeks ago?! This little guy is one of the luckiest pigs as he was adopted by an awesome guy. His new dad has done everything right & is a great example to potential pig parents!

This seems to be a question I hear more often than not these days… So here’s the story, from the beginning. In 2014 I was in Austin Texas getting tattooed. The artist I was working with began telling me about his 3 pugs and their sister Rosie, a potbelly pig. I was instantly fascinated by the idea of a pig. I’d never given a pig much thought but after a few hours of us talking (while he stabbed my leg over and over haha) I was hooked. I started reading about pigs, following pig accounts on social media, and talking to local folks I knew with pigs (back in Raleigh, NC).

The biggest shock to me though, sadly, was how corrupt the pig industry is – NOT from a food perspective (as that is totally F’d up, and a topic of another conversation) but the “teacup/mini pigs as pets” industry. The further down the rabbit hole I got, the more it became apparent that pigs were becoming this trendy “thing” for people to have – and the idea of this miniature animal was far too appealing, to most. I quickly realized this was a HUGE myth – I mean, everything is miniature at one point in life, but then life happens and they GROW UP. And so what happens in return? You wind up with a subsequent industry of people dumping these pigs and rescues having to exist to re-home these toys. Pretty horrible.

So I decided early in 2016 that I would start seriously considering a rescue. For 11+ years now I’ve been a huge advocate for animal rescue – having rescued as well as re-homed lots of dogs, chickens, etc. I hadn’t dealt with pigs yet but started to befriend several pig rescues to further educate myself. I learned a tremendous amount last year – the intelligence of a pig (sooooo many people claimed that if I was truly interested in having a pig I first needed to let a 4yo kid live with me for a week and then determine if this was the right fit for me). I found a pig last year that I was ready to take on but unfortunately and almost the exact same time one of my dogs (who has now passed) was diagnosed with a highly aggressive cancer, and required nearly round the clock care. It wasn’t fair for me to introduce another being into the mix at that time (both for him AND for the newbie) so I elected to help place the pig VS take him on myself. It was the right decision for all parties.

So I continued educating myself – reading and talking to people. I knew I would eventually find one to bring in, but wasn’t rushing – UNLESS it was necessary. Then Theodore came along. A friend of mine volunteers at the local animal shelter and knew I loved pigs. And behold, a pig showed up at the shelter – found walking along the road. The policy at the shelter is that if livestock is not claimed it goes to auction. Meaning it could wind up on someone’s dinner table. That was NOT going to happen on my watch. So next thing I knew, I was standing in a lot, at a livestock auction. This was actually going to happen! WHAT WAS I GETTING MYSELF INTO?!

I wasn’t quite prepared to bring Theodore Newton home (enclosures did not exist) so for the first week he stayed with my friends up the road (who also have a menagerie of animals). He adjusted great! I visited with him daily and won him over with daily treats. And yesterday, he finally moved into his permanent home at my house. He has an 850q ft enclosure for when I’m gone, and free reign of the whole yard when I’m home. He lives adjacent to his new sisters (9 chickens) as well as 3 dogs (Stella the boxer/bulldog – who has fame herself as the homepage model for Nationwide Pet Insurance, Bennie and Mille, 2 Boston terrier rescues that joined my family in August and October of last year). Theodore’s enclosure is complete with multiple landscape textures to experience (rocks, grass, dirt, mulch, etc), a custom built modern piggy house, and a plethora of toys and enrichment activities.

Theodore is such a sweet boy – running up to everyone wagging his tail and oinking… he’s yet to meet a stranger. He LOVES belly rubs and exploring his new digs. Theodore has already begun to educate people about the reality of pigs – ALL types of pigs, and help expose these crazy industries (meat + pet) that pigs have found themselves in. 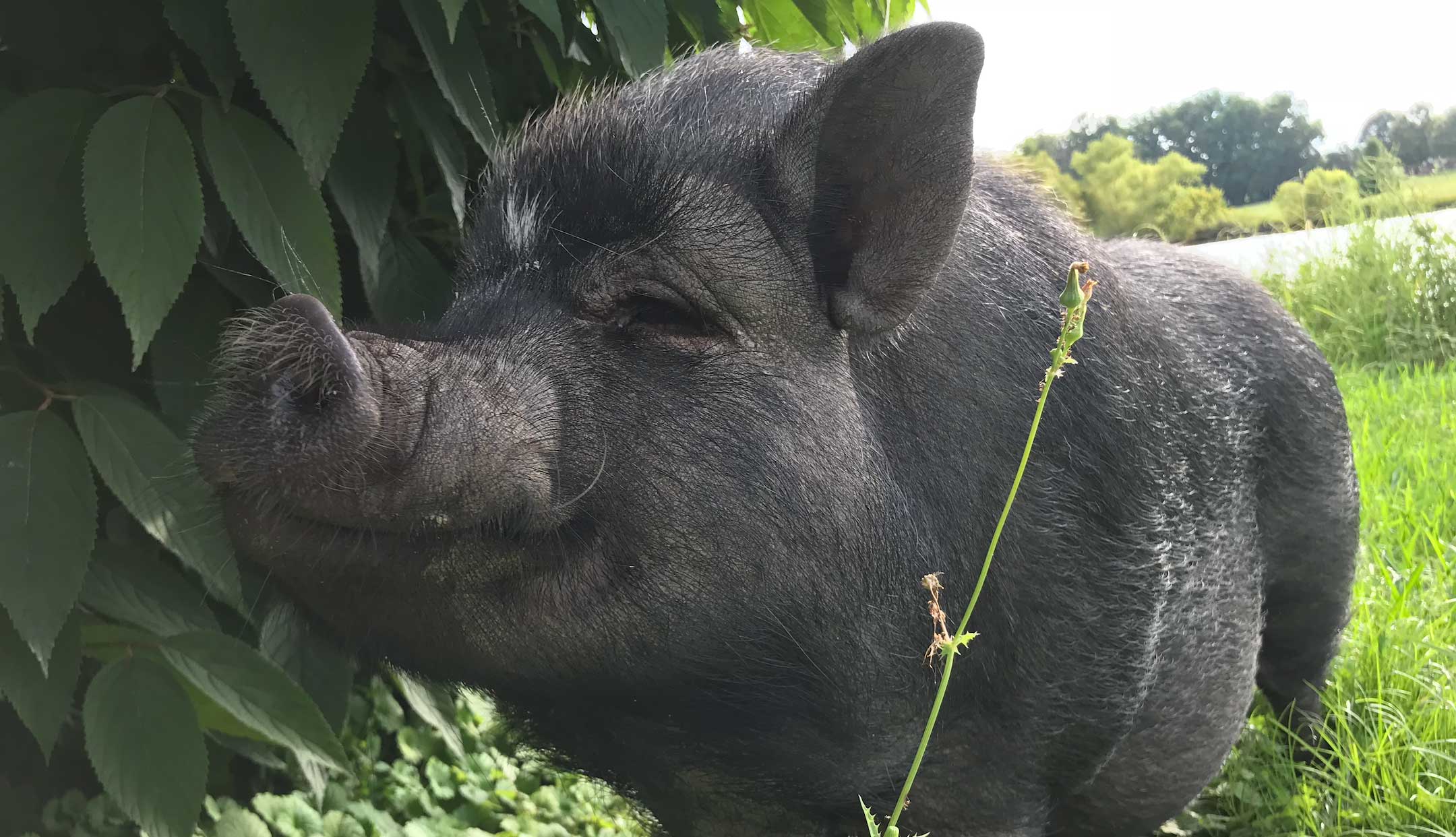 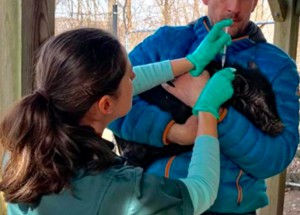